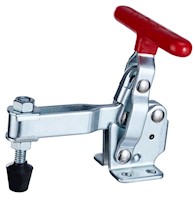 A Toggle Clamp: What Is It?

Some of the benefits of using a toggle clamp include the following:

Toggle clamps come in both horizontal and vertical varieties. The way that vertical toggle clamps work is similar. But when the arm is set in a locked and clamped position, it stands up straight.